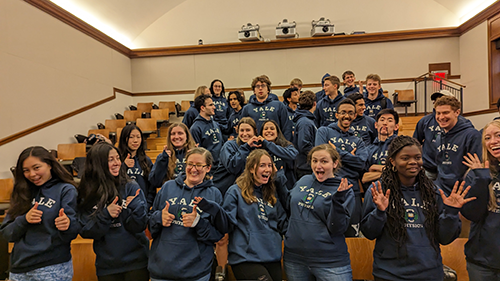 On Friday, November 11, 2022 the physics department held the 8th consecutive hoodie ceremony to welcome the class of 2024 to the physics ranks! Due to the weather the ceremony was held in SPL 57 where quite a crowd gathered. The ceremony started with some brief comments by Karsten Heeger (Department Chair) and Sarah Demers (Director of Undergraduate Studies). Hoodies were handed out by Daphne Klemme (Undergraduate Registrar).

This year, due to a change in licensing requirements a new Yale shield was added to the hoodie. 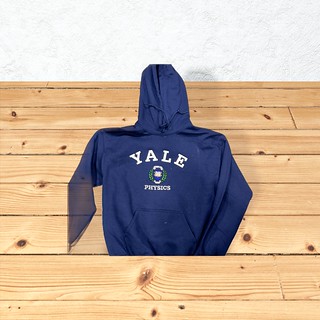 The students were excited and eager to get their hoodies, even a couple of sophomores who were attending! (They were informed they would get theirs next year). One student, Ben McDonough, a Physics (Intensive) major who was one of the hoodie recipients , commented that “he had to come as this was the moment he had been waiting for since his freshman year.”

Wyatt Kremer, co-president of the Yale Society of Physics Students, and one of the hoodie recipients observed, “We could really feel the unity of our class at the ceremony. It was surprising how many students I met that I happened to not share a class with in the past. This speaks to the diversity of interests that intersect at physics.”

In addition to the Junior class there were a couple of seniors who received their hoodies as they had not been able to last year. This was the largest group of students to receive hoodies to date.