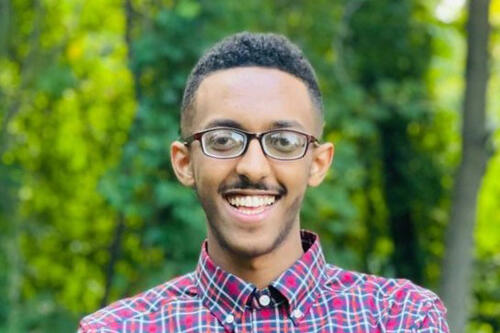 Barkotel Zemenu, YC ’2024 Physics-Intensive major, and a member of Yale’s Wright Lab, has been named a Rosenfeld Science Scholar. The award is given to Yale undergraduate researchers who have demonstrated exceptional potential and commitment through their coursework and prior research experience, and presented a well-developed proposal for a research project with substantial pedagogic and scholarly merit. Zemenu, whose research interest focuses on High Energy Nuclear and Particle Physics, won the award with his proposal titled, “Towards Accurate Diffusion Coefficients for Potential nEXO Samples.”

Zemenu states, “I have been working at Professor David Moore’s lab since winter break of my first year. The main focus of my research group is the detection of neutrinoless double beta decay. It’s this exotic nuclear process that could theoretically happen, but is so rare that we have never observed it with existing detector technologies. My work in the past year and a half has centered around the R&D phase for an upcoming detector called nEXO. It’s really big, and we’re making sure that it’s also really clean. If the decay is observed, the Standard Model in particle physics would undergo important modifications. It’s like a discovery with the potential to refashion the “Periodic Table of Particle Physics.” Last summer, I took independent research for credit and received the Yale College First-Year Summer Fellowship Award in the Sciences and Engineering to be deeply immersed in my work. I am excited to continue my summer research with the Rosenfeld award! Working at Professor Moore’s lab has definitely been one of my major academic highlights at Yale!”

Rosenfeld Scholars are chosen from the same applicant pool as recipients of the Dean’s Research Fellowship, among currently enrolled sophomores and juniors. The students with the top GPAs in the pool are considered for the Rosenfeld award. Dean Sandy Chang, Associate Dean for Science and Quantitative Reasoning Education, said he and several other Yale science professors then review these students’ proposals and select the most promising projects.