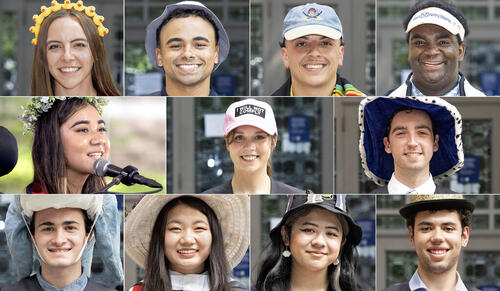 Matthew King, YC’2022 double-major in Physics (Intensive) and Mathematics (Intensive), was one of 11 members of the Class of 2022 who distinguished themselves in the classroom, on the athletic field, and in their communities were honored with top Yale College prizes today in one of Class Day’s most treasured traditions. The prizes were awarded by Yale College Dean Marvin Chun and other Yale leaders.

Awarded annually for the senior majoring in the natural sciences or in mathematics who ranks highest in scholarship. This year’s prize is awarded jointly to Matthew John King of Ezra Stiles College and Sarah Ming-Xin Zhao of Berkeley College. 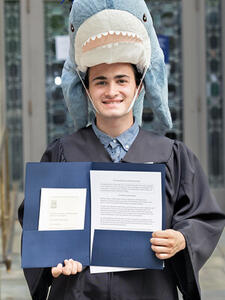 “Outside of the classroom, Matt devotes much of his time to creative expression and teaching others: he has served as an Undergraduate Learning Assistant in the Mathematics department, a Course-Based Peer Tutor in the Physics department, and an instructor with Yale Splash. He is an Eagle Scout, the president of the Yale Guild of Bookmakers, and an accomplished writer and musician.

“An aspiring professor, Matt has spent the last two summers researching particle physics at the Fermilab in Illinois [with Bonnie Fleming, professor of physics and a member of Yale’s Wright Lab]. He will begin a PhD in Particle Physics at Yale in the fall and has been awarded a fellowship by the National Science Foundation’s Graduate Research Fellowship Program.”