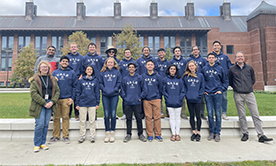 The Yale University Physics Department officially welcomed 28 newly-declared undergraduate majors in physics, physics (intensive), physics and philosophy, and mathematics and physics in its annual hoodie ceremony on Friday, October 29, 2021. Department Chair Karsten Heeger made some introductory remarks and turned the ceremony over to Nikhil Padmanabhan as the Director of Undergraduate Studies. Prof. Padmanabhan read the names of all the majors. Lab instructors Stephen Irons and Sidney Cahn attended as representatives of the faculty. The ceremony was held outside in the Science Hill Courtyard on an overcast and slightly windy day but it was nice being able to present the hoodies in person and without masks. 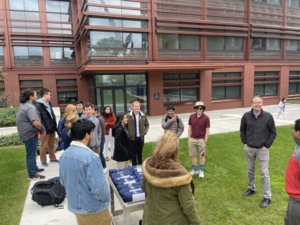 The annual hoodie ceremony began in 2014 in order to acknowledge students who have formally declared as a physics major.