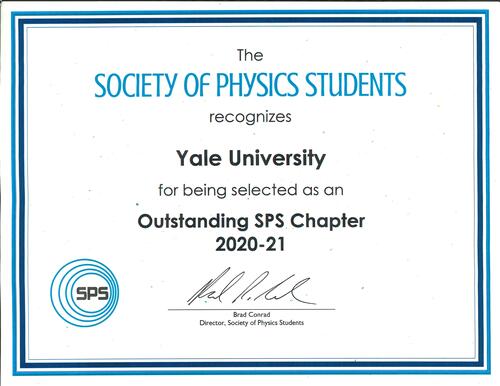 The Yale University chapter of the Society of Physics Students (SPS) has won an Outstanding Chapter Award from the SPS National Office. This is the second time the chapter has been recognized for its excellence as a top-tier student-led physical sciences organization, a designation given to fewer than 15 percent of all SPS chapters at colleges and universities in the United States and internationally.

The Society of Physics Students (SPS) is a professional association designed for students and membership is open to anyone interested in physics and related fields. SPS operates within the American Institute of Physics (AIP), an umbrella organization for professional physical science societies.

The SPS chapter at Yale University is advised by Associate Professor Nikhil Padmanabhan and is led by student officers. The 2021-2022 officers are:

“We are proud, grateful, and immensely honored to have received national recognition for the Spring 2021 SPS Board’s efforts to have an impactful and positive presence on campus. In this remote semester, the board worked hard to coordinate meaningful social events, coding workshops, prize lectures, and maintain general morale and excitement for physics during these difficult times. Our predecessors have left immense shoes to fill as co-presidents, and we hope to do them proud—we keep their wonderful leadership in mind always, and especially as we head into the new year and upcoming semester.” said Amanda Butler.