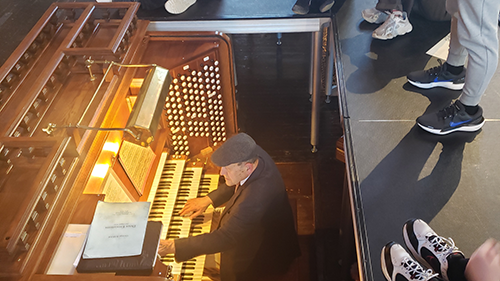 SPS members enjoyed exploring the inner workings of the Newberry Memorial Organ in Woolsey Hall during a private tour. Organist Thomas Murray explained how the divisions of the instrument are controlled by pulling out different stops and played sample pieces alongside his graduate student. The tour included a trip to the bellows in the basement and the hidden hallways running behind the pipes. Students learned about harmonic modes and the change in cavity length needed to move up an octave. The beauty of the physics that realizes the booming organ will return in Ben McDonough’s lesson on the physics of music to be included in the Physics of […] outreach series. See the physics department flickr album for more photos.